The Cree language (also called Cree-Montagnais-Naskapi) is spoken in many regions of Canada, from the Rocky Mountains in the West to Labrador in the East. Cree is also spoken in northern Montana in the United States. Cree is one of the most widely spoken Indigenous languages in Canada. In the 2016 census, 96,575 people reported speaking Cree. It is an official language in the Northwest Territories and recognised as a minority language in Alberta, Quebec, Manitoba, Ontario and Saskatchewan.

Canadian states where Cree is spoken

It is said that Cree had begun as a dialect of the Proto-Algonquian language spoken 2,500 to 3,000 years ago in the original Algonquian homeland. Algonquian languages are a family of Native American languages spoken throughout North America. While there is very little to no written documentation on how the Cree language spread in Canada, it is believed that Cree-speaking groups emerged and moved around from their original Algonquian homeland believed to be near the Great Lakes area in Ontario. Jesuit missionaries made the first contact with Cree people in 1640 in James Bay.

In the pre-colonial era, Cree was orally transmitted and did not have a writing system. In 1840, a missionary at Norway House in present-day Manitoba devised a syllabics system (i.e. symbols representing a combination of consonant and vowel, or just a consonant or vowel) for the Cree, probably in collaboration with Indigenous Cree-speaking people.

Contemporary Cree and the future

Cree and its dialects are the most widely spoken Indigenous languages in Canada with the vast majority of speakers living in Saskatchewan (27.8%). Whilst the language has official status in some states, it is declining as English is progressing in the younger generation. Many cultural and educational organisations are working to preserve and promote the language by creating networks of Cree speakers to exchange and share their dialects’ singularities. 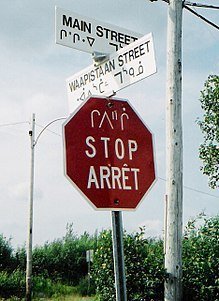 Our other Indigenous Language Series articles: