The Guarani language is an Indigenous language of South America. It is spoken in Paraguay, in the Amazon rainforest, in Brazilian states, from the Atlantic coast in the east to the Andes of Bolivia and Peru in the west. Despite its vast geographical spread, the difference between the languages is relatively small. The Guarani language is spoken by more than 4.6 million people in the South American region, mainly in Paraguay, of which a large proportion are non-indigenous. 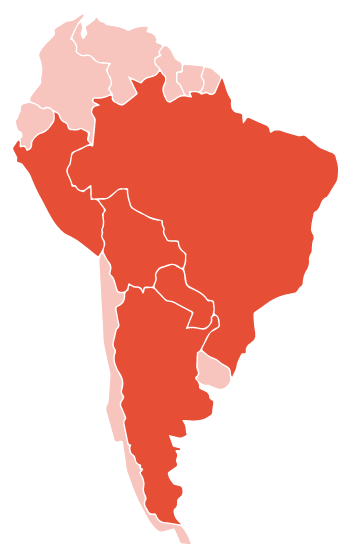 Countries where Guarani is spoken

Guarani has always been the primary language of colonial Paraguay and it is often mistakenly believed that it spread through the Jesuit reductions or mission expansions from the 16th to the 18th century. Even though it was the main language spoken in the reductions, the Jesuits adapted and complexified it to be able to convey Western concepts, shying away from the typical flow of incorporating Hispanicisms without phonological adaptation used by the Indigenous populations. The latter form spread into other regions following the expulsion of Jesuits with migration flows towards the north and the west.

A good example of this phenomenon is found in the word “communion”. The Jesuits, using their agglutinative strategy, rendered this word “Tupârahava”, a calque based on the word “Tupâ”, meaning God. In modern Paraguayan Guarani, the same word is rendered “komuño” closer to the Spanish translation of “comunión”.

The Guarani language found its written form relatively recently. Prior to the Spanish colonisation of South America, it was exclusively an oral language. The first written texts in Guarani were produced by Jesuit missionaries who used Latin script to represent the language. Its orthography is largely phonemic, with letter values mostly similar to those of Spanish. For example, the tilde is largely used in its alphabet. The modern Guaraní alphabet is an adapted version of the Roman alphabet.

Example of basic written translations from English into Guarani

Whilst being largely spoken by populations including non-indigenous people, the Guarani language faces some threats like the increasing migration of rural populations from the interior, where Guarani is often the dominant language, to cities, where Spanish holds more sway. In an article from the NY Times (written by Simon Romero in 2012), Ramón Silva, a Paraguayan poet and host of a Guarani TV show said the language is “slowly advancing to its death”.

He said his major concern involved the creation of new words in Guarani to replace words borrowed from Spanish. “Using poorly created words may be well intentioned,” he said, “but neglects the reality of the language and pushes speakers into Spanish.”

The language still enjoys a strong nationalist sentiment and is proudly taught in schools and an increasing number of publications and books are made available in the language.