Our CEO Tea Dietterich was one of the panel speakers at last night’s Australian Women in Business Event on gender equality at the Australian Embassy Paris.

In 2016, across the world, women only fill 20% of senior positions despite representing about 50% of the workforce. So what do we need to do to reach the tipping point? The Embassy was hosting the panel discussion on gender equality, followed by a Q&A session and networking cocktail. Australian journalist Annette Young moderated the panel.

Annette Young is a senior journalist and news presenter for France 24 Television, based in Paris. She hosts the 51 Percent, a program about the women reshaping our world. Originally from Australia, Annette has reported from parts of Europe, the Middle East and Asia. In an extensive career she has worked for the Melbourne Age, the Sydney Morning Herald and SBS Television Australia. While based in the Middle East she became a Jerusalem correspondent for France 24. Since returning Paris in 2010, Annette has interviewed a range of figures for the network from world leaders to Hollywood actors. In 2015, she was named by UN Women as one of the 20 inspirational global voices on women in the media. 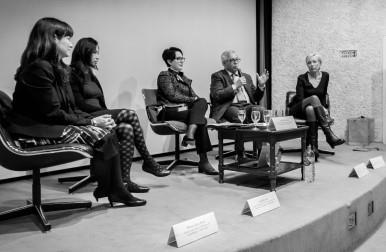 Tea Dietterich said “It was an excellent event showcasing some of Australia’s inspiring initiatives including the Glass Elevator and Male Champions of Change, as well as actions taken by organisations like ASX Limited to increase women in senior positions to 40% and how they achieved this”. Tea has been inspired by Australian women including Ann Sherry and Alison Watkins. Alison Watkins is MD of Coca Cola Amatil who is the lone Australian on Fortune’s list of most powerful women. For leading cost-cutting plans on Coca-Cola’s Australian producer and distributor, Alison Watkins has made it to Fortune magazine’s list of most powerful women in business. The 53-year-old group managing director of Coca-Cola Amatil ranked 47th on Fortune’s 2016 global ranking and 22nd on the latest Asian ranking. Ann Sherry is Executive Chairman of Carnival Australia, the largest cruise ship operator in Australasia and a division of Carnival Corporation & Plc.

The Australian Council of Superannuation Investors has adopted a gender equality target for women to comprise 30 per cent of all ASX200 boards by the end of 2017, “based on the belief that skilled and suitably diverse boards make for better-governed companies”.

2M’s client BHP Billiton also made recent headlines when CEO Andrew Mackenzie announced one of the most ambitious gender equality targets of any large company by pledging to make half its workforce women by 2025. At the Melbourne-based mining and energy group women currently make up 17 per cent of the global workforce. BHP’s target covers its entire workforce including the board with senior managers now given a specific performance goal of lifting female representation by 3 per cent each year. BHP says it has included the goal of inclusive and diverse teams in its charter and, says Mr Mackenzie, this will now be “a key measure of performance”.

Tea was also asked how women can ensure they are part of the digital age and are not left behind. Tea said: “We invest heavily in new technology in our business.  Digital is part of every industry.  We must accept artificial intelligence and not judge it.  Confront this. Those who judged machine translations were left behind. Women must invest in technology – if you don’t continue to change your business, pricing, ICT models, you are left behind. Attend the OECD forum in Paris – and ideas factories examining the future – open up to digital, artificial intelligence and…  Be Bold – Be Brazen.” 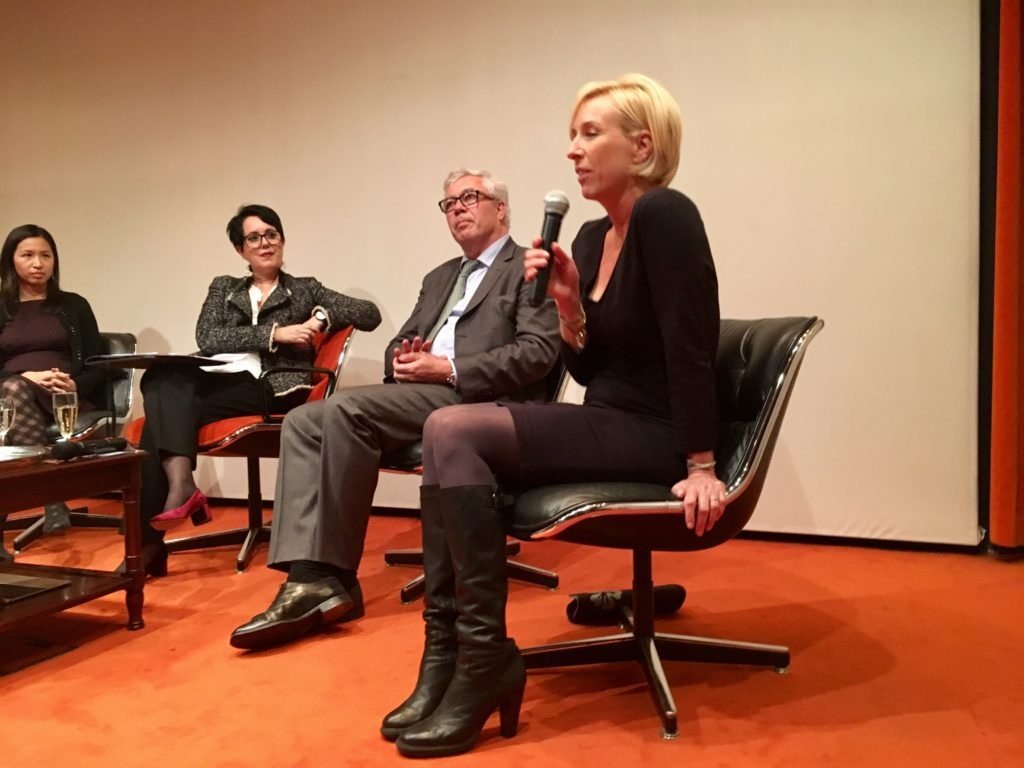 Profiles of all the Speakers on last night’s Panel:

Tea C. Dietterich is CEO of 2M Language Services, an international translation and interpreting provider with Head Office in Brisbane and a European Office in Paris. 2M provides translations into 200 languages across a range of industries including tourism, mining, government, health, finance, legal, technical, art and advertising, as well as multilingual DTP, website & software localization, multilingual voice overs, dubbing & subtitling and the off-site team is in charge of cross cultural training and simultaneous conference interpreting for international events.

Current President of the AALC Inc (Australasian Association of Language Companies), Board Director of GALA (Globalisation and Localisation Association), Member of the NAATI RAC (Regional Advisory Council of the Australian National Accreditation Authority for Translators and Interpreters), Member of the European Language Industry Association and Fellow of AUSIT, Board member of ABIE France, Tea is one of Australia’s industry leaders in the T&I landscape and has particular interest in the latest language technology developments and linguistic innovation.

In 2013 Tea was the winner of the Australian National Multicultural Marketing Awards in the Export Category and in 2015 Tea was awarded the Lord Mayor’s Business Person of the Year in Brisbane. Tea writes a column in Dynamic Business and Marketing Magazine and has been featured on Sky News Business Class program. Tea was one of the judges and presenters of the 2016 NSW Export Awards 2016 in Sydney. Tea holds Masters Degrees in Translation, Interpreting, Linguistics and Cultural Studies for Spanish, English, German and French from the Johannes Gutenberg University Mainz (FASK Germersheim) and University of Granada (EUTI) with specialisation in international law.

Olivier Fleurot was appointed Senior Vice President of Publicis Groupe on September 1st 2015, overseeing Communications, Corporate Social Responsibility (CSR), Real Estate, Insurance and cross-disciplinary programs such as Altaïr, the ERP program. Between 2009 and 2015, Olivier was the CEO of MSLGROUP, a global network of agencies in the field of strategic, corporate, and financial communications as well as events management within Publicis Groupe, advising clients on their communication strategy, off-line and on-line. Olivier Fleurot joined Publicis Groupe in 2006 as Executive Chairman of Publicis Worldwide, a global network of agencies, which employed 10,000 people in 80 countries.

From 1999 to 2006, he headed the FT newspaper first, then the Financial Times Group in London. As CEO, he was responsible for all publications and online activities. During his tenure, the Asia edition of the FT was launched, as well as the FTChinese.com website in 2003. In the early days of Internet, when many publishing companies were resisting new media, he initiated the merger of digital and print in 2002, and launched the paid subscriptions to FT.com thus paving the way for a new business model in the digital world.

Prior to joining the Financial Times Group, Olivier was head of marketing and communication of the French business daily Les Echos, before being appointed CEO of the Les Echos Group. An engineer by training, he was also a journalist specializing in high-tech in the early 1980s. For 7 years, he has been teaching sessions of the Executive Master in “Management of Media and Digital” at Sciences Po University.

After 3 years as a consultant at McKinsey & Company, Isabelle Loc joined BNP Paribas in 2010 in Equity and Commodity Derivatives. In 2013, she joined General Management as Secretary of the Group Executive Committee. Since 2016, she is Managing Director covering French Strategic clients. Isabelle graduated from Ecole Polytechnique and holds a Master’s degree of International Affairs, from the School of International and Public Affairs of Columbia University.

Helen Jane leads the global M&A legal team for the AXA Group, advising on international mergers & acquisitions, joint ventures and partnerships. She works in closely with the executive management in a business that is dynamic and innovative, in line with AXA’s strategic direction such as its digital transformation and focus on high growth markets, at the same time facing the challenges of an increasingly stringent regulatory environment. She grew up in both England and Australia and has been living in Paris since 2012.

The AXA Group is a worldwide leader in insurance and asset management, with 166,000 employees serving 103 million clients in 64 countries. In 2015, IFRS revenues amounted to Euro 99.0 billion and IFRS underlying earnings to Euro 5.6 billion. AXA had Euro 1,363 billion assets under management as of December 31, 2015. In this year’s Interbrand’s Best Global Brands ranking, AXA was awarded the No. 1 insurance brand worldwide for the 8th consecutive year, and the 46th best global brand.