Pitjantjatjara is part of the Western Desert Group of the Pama-Nyungan languages spoken in central Australia, particularly in the northwest of South Australia, in the southwest of the Northern Territory and in neighbouring parts of Western Australia. Speakers of Pitjantjatjara call themselves Anangu (people) and their language is closely related to Yankunytjatjara and Ngaanyatjarra. 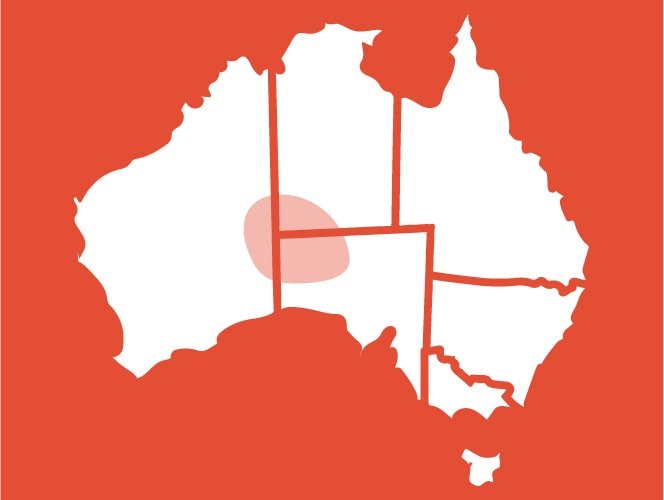 The Anangu people have lived in this area for at least 30,000 years; for the Anangu people, their culture has always existed here. The Central Australian landscape (of which Uluru and Kata Tjura are an important part) is believed to have been created at the beginning of time by ancestral beings. First contacts with non-Aboriginal people were made in the early 1870s.

Pitjantjatjara has been transcribed using the Latin alphabet since the 1940s and the spelling system was standardised in 1979 and confirmed in 1987 by the publication of a Pitjantjatjara–English dictionary. From 2002 we also have Pitjantjatjara translations of parts of the New Testament. About 50-70% of Pitjantjatjara speakers are literate in their language.

The primary form of the language remains oral, and Pitjantjatjara verbal art includes highly-developed forms of rhetoric, story-telling, songs and sung epics, and styles of kinship-based respect and deference.

With a fairly high number of speakers, the Pitjantjatjara language is relatively healthy. In the 1940s it was introduced in the bilingual programs of several South Australian schools.

With renewed interest in Indigenous languages, Pitjantjatjara programs for Indigenous students were commenced in schools in Port Augusta and Adelaide. From 1994 Alberton Primary School taught Pitjantjatjara to all students and included Kaurna songs in their choir repertoire. In 2000, Aboriginal languages (Pitjantjatjara, Yankuntjatjara, Antakarinja, Wirangu, Arabana, Adnyamathanha, Narangga, Kaurna or Ngarrindjeri) were offered by 63 schools to 2,500 South Australian students, the majority Indigenous.