The Náhuatl language is by far the most spoken indigenous Mexican language with about 1.4 million speakers (Mexican National Institute of Statistics and Geography, 2009). It is predominantly spoken in central Mexico: Puebla, Veracruz, San Luis Potosí, Guerrero and Hidalgo although it has spread to other regions including the US due to immigration. Náhuatl, historically known as Aztec, is from the Uto-Aztecan language family. 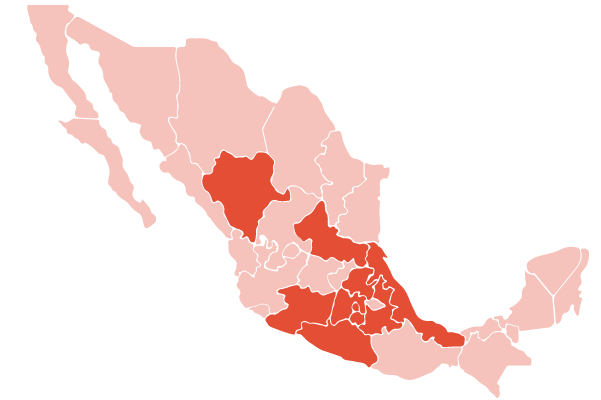 The Náhua probably originated from the deserts of northwestern Mexico and the American Southwest. Around 500 AD, the earliest Náhua arrived in the Valley of Mexico and adopted agriculture and urban living which were already being practised by Mesoamerican civilisation.

Classical Náhuatl was the lingua franca, the common language of all the different peoples that came together under the Aztec civilisation. The Aztecs are the latest great Mesoamerican civilisation that lived in Mexico in the 13th century and flourished to become dominant until it was overthrown by the Spanish conquistadors in 1521. At this time the Náhuatl languages were spoken in most areas that were under the Aztec ruling.

After the Spanish arrived, Náhuatl was displaced as the dominant language but still managed to spread as conquistadors formed alliances with Náhuatl speakers to gain new territories north and south. Numerous Náhuatl words have been borrowed by the Spanish such as:

Some of them were later absorbed into English as well, including chile or chilli, avocado, chocolate, coyote, peyote, guacamole, ocelot and mescal.

Unlike the Maya, the Náhua did not have a full alphabet. Their writing system consisted of a mixture of ideographic and phonetic writing. The same symbols are used for each system, and which one was being used depending on the context. Thus, the writing system was partly phonetic, but not entirely which has made it more challenging to translate parts of the Náhuatl codices.

The Spanish introduced the Latin alphabet to write Náhuatl, and a large amount of prose and poetry was subsequently written. Ever since there has been considerable debate about how to spell Náhuatl.

This text was provided by Pierre Sánchez and is written in the “normal way” used by Nahuatl-speaking communities.

All human beings are born free and equal in dignity and rights. They are endowed with reason and conscience and should act towards one another in a spirit of brotherhood.
(Article 1 of the Universal Declaration of Human Rights)

For a long time, Náhuatl has been in decline due to the effort from the government in Hispanisation to modernise the country.  Although 2003 saw the creation of a federal law designed to protect the linguistic rights of Mexican indigenous people; simultaneously, federal education legislation was modified, guaranteeing speakers of indigenous languages access to basic education in their native tongue.

Náhuatl suffers from the ideology shared by indigenous and non-indigenous people alike, that native tongues are “dialects”, and cannot be considered languages, such as Spanish and English. It’s not surprising then that indigenous people, especially after migrating to the cities, deny that they speak their native tongue and do not pass it on to their children.

Náhuatl is indeed on its way to becoming an endangered language. Yet, in 2009 there were approximately 1.4 million people speaking twenty-nine variants of Náhuatl in Mexico, and continuing to practice and develop diverse aspects of culture rooted in pre-Hispanic times.