First arriving in Tasmania (then a peninsula of Australia) around 40,000 years ago, the ancestors of the Aboriginal Tasmanians were cut off from the Australian mainland by rising sea levels c. 6000 BC. They were entirely isolated from the rest of the human race for 8,000 years until European contact.

Before British colonisation in 1803, there were an estimated 3,000–15,000 Palawa. The Palawa population suffered a drastic drop in numbers within three decades, so that by 1835 only some 400 full-blooded Tasmanian aborigines survived, most of this remnant being incarcerated in camps where all but 47 died within the following 12 years. 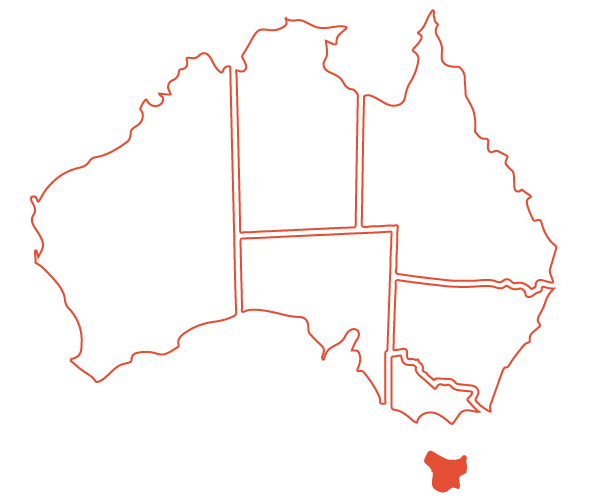 Between 8 and 16 separate languages could have been spoken in Tasmania originally, although there are limited to no recordings or material to confirm that theory. Some tribes had been wiped out by contact sicknesses even before full-scale colonisation and the languages continued to disappear with the people. Fortunately, remnants of many of those original languages were written down in wordlists by more than twenty different European recorders, starting from Cook’s visit in 1777 right through the colonial period.

Palawa Kani is currently a language revival project led by the Tasmanian Aboriginal Centre. As mentioned above, there are very little recordings or written materials of the traditional Tasmanian languages. The researchers rely on books, word lists, manuscript materials and audio recordings to reconstitute the language. They were able to collect over two hundred words, phrases and song fragments from the memories of over thirty Aboriginal people throughout the twentieth century.

Many of these duplicate each other, across different families and time periods, and from both mainland Tasmania and the Bass Strait islands. People living today still sing songs they learned as children, which they have taught their own children, and these are recognisably anglicised versions of songs recorded from Aborigines in the 1830s.

One challenge that is encountered by researchers is that many of the material gathered across the years are only approximations by European colons of many nationalities who tried to capture unfamiliar Aboriginal sounds in their own spellings. Those spellings of words written by the recorders, and since published and written in their books are not in themselves Aboriginal words.